Pick Of The Week on BBC Radio4 :

Only Artists with Julie Hesmondhalgh

In 2019 I was chuffed to be approached by BBC Radio 4 to take part in their long-running Only Artists series. The format is that the nominee is asked to choose another artist from a different discipline with whom they then meet and chat, with the discussion edited down into a 30 minute programme. The decision was a difficult one, but I was delighted when the wonderful, BAFTA-nominated actor Julie Hesmondhalgh agreed to take part.

I’d met Julie a couple of times on the Manchester arts scene but we’d never really had an in-depth chat. I knew that we shared a working-class background and were both supporters of the charity, Arts Emergency but, beyond that, I was excited to find out more. What would our stories and practices share? And how would they differ?

We met in Manchester’s amazing Royal Exchange Theatre, where Julie has starred on the main stage many times and I’ve performed in a number of cabaret events. For peace and quiet, we holed ourselves up in a dressing room, pressed Record and, well, the conversation flowed!

“I’d urge anyone involved in education at any level to listen to this warm, moving, impassioned conversation…” Radio Times

Whilst, on one level our childhoods could be said to be broadly similar, to reduce the northern working class experience to an amorphous mass would be to miss entire levels of nuance and subtlety and richness. What emerged was the extent to which the arts were a gateway for Julie and how a single inspirational teacher can change an entire life. In contrast, my own altogether more deprived childhood lacked any kind of capital – economic, cultural or social. It was music for me, particularly the punk and post-punk scenes, which first opened my eyes to the world beyond our council estate. Having been inspired by a primary school teacher to write poetry from the age of 5, I didn’t study English beyond O Level and eventually dropped out of my ill-chosen university course. I was 39 before I found the confidence to first read a poem in public.

As the warm and wide-ranging discussion unfolded, we kept coming back to the importance of the arts in reflecting and inspiring lives, with working class lives as valid and important as any.  Julie had enjoyed my book and had been greatly moved, she told me, by my performance of This Is The Place after the Manchester Arena bomb. At Julie’s insistence I read a poem written when I was aged 10 about the boxer Mohammad Ali and another, Posh Things, from my book. 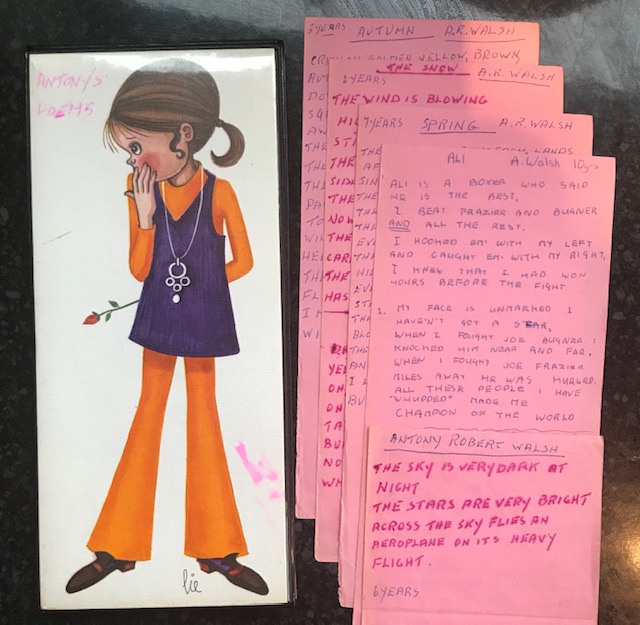 The programme was a Pick of the Day in the Radio Times and scientist and broadcaster Jim Al-Khalili selected my poem as part of his Pick of the Week highlights show.  Social media was filled with lovely comments, someone wrote about pulling over in the car to weep, with one poor woman allowing a bath to overflow and come through her kitchen ceiling as she tuned in! 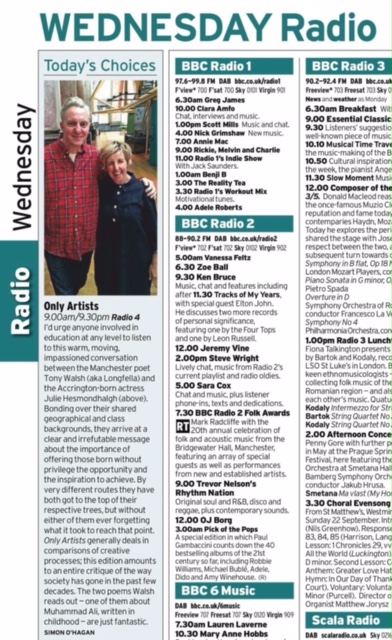 Of all my poems, Posh Things is amongst those that mean the very most to me personally and so it was a real thrill to find it connecting so deeply with so many others and giving pause for thought to many more.
By the wonder of modern technology, the whole show can still be heard on (and downloaded from) the BBC website.

Do tune in and give it a listen, but do please turn off any taps first!

With huge thanks to Julie for being such a lovely and inspiring chat mate and equally to the inestimable Clare Walker at the BBC for making it all happen.

@JamesFHall So we’re having effectively a decade’s worth of music - the 60s, the 70s - released every ten days! 🤯

That’s a mind-blowing statistic! “What happens when we can’t sing the same songs together any more?” t.co/XYZ8nX121S

RT @pebblepicassos: 'George Orwell' 2023 by Justin Bateman. 'Everyone will have the face they deserve by the time they are fifty' t…

RT @knightjennyk: Warming words for *vintage* creatives.. ‘It’s never too late to be what you could have been’ - George Eliot t.co…